Send us your news!

We’re eager to learn “where are you now?”  and “are you still active making music?” We have seen many of your musical careers launched and we celebrate your successes. Here’s a few items, some of which need to be brought up to date. We hope to hear from more of you.

Shown below (violinist, San Clemente HS ’95, Cleveland Insitute of Music ’99, Juilliard Master of Arts ’01) is not only a GREAT violinist, she is a composer and also has an alter-ego she calls Kono Michi. Her many CDs are terrific…. very sensual and creative. Be sure to visit her website 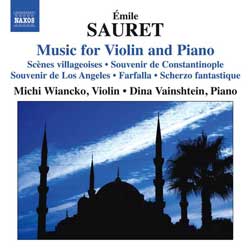 One of many CDs Michi’s recorded

All three of the Wianckos (Michi, Paul and Hiroko) studied chamber music with Kay Pech in the 1990s. Michi has performed worldwide with the Mark Morris Dance Group, and has led the East Coast Chamber Orchestra (ECCO). In 2016 CMIsc students performed a “modified” version of her creative variations for ECCO, Corelli-Geminiani’s “La Folia,” in our July concert.

August 2017 update: Michi and her husband, composer Judd Greenstein, were busy with inaugural summer concerts on their Antenna Cloud Farm in western Massachusetts. Their two-year-old daughter, Aki, is already enjoying her musical life as Michi has composed a special afternoon performance of music written specifically for the occasion, for both acoustic 4-string and electric 5-string violins. Michi performs in a wide variety of musical styles and genres that include fiddling, blues, renaissance, and fully improvised works.

Paul was awarded a $5,000 prize, the “Washington Award” as a composer in January 2018. Paul has written genre-bending works for the Aizuri Quartet, yMusic, Boston Cello Quartet, and the Grammy-winning Parker Quartet among many others. As a cellist, his versatile artistry has led to collaborations with artists ranging from Chick Corea and Jóhann Jóhannsson to Yo-Yo Ma and the Guarneri Quartet. Mr. Wiancko writes and performs regularly with his chamber ensembles Ayane & Paul and Bird’s Eye Trio. You can find more about Paul at his website. There you can read about Paul, purchase his music and hear his compositions. 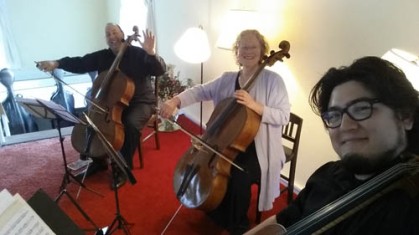 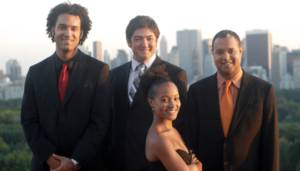 The Harlem Quartet in worldwide travels

Shown here with his former Harlem Quartet, Paul travelled to South Africa in 2012 where he spent 2 weeks working with music students and teachers in Johannesburg, Cape Town, and Durban. He then stayed an extra week to go on a safari in the Kruger National Park. A couple months later they flew to Anchorage for a performance with the Symphony and he hiked through the incredible Alaskan wilderness. As he says, “The music never stops around here!” An excellent photographer, his many travels worldwide are documented on his Facebook page.

Known to us as “Charlie,” he was a Finalist in 2017 in our Composition Contest, with the prize of winning a recording of his quartet “Downtown F.” If you have ridden this subway line in NYC, you’ll recognize the sounds! This was recorded in July 2017 by our Faculty Quartet of Leslie Ho, Sarah Wallin Huff, Kay Pech and Judy Kang.

Charlie now lives in New York City and is a computer consultant for businesses. Married just one year (our CMIsc trio played for his wedding to Chelsea Lee on July 3, 2016 in Anaheim Hills), he continues to perform with an orchestra in the city. He graduated at Los Alamitos HS (’08) and Yale University (’12), has completed his First Symphony and it was performed by the Yale Davenport Pops Symphony on April 15, 2011.

Summer 2019 update: Charlie and Chelsea Sharzer are expecting a baby! They have moved to the west coast and we hope he’ll fill us in on what he does now.

Lynnie Sharzer is a violinist/violist who played with CMIsc for years, was working in New York City and occasionally playing chamber music. She graduated at Los Alamitos HS in 2010, and Emory University (where she played in the orchestra) in 2014. Lynnie is now making a new life in Boston and we’re eager to hear more news!

Darrell travels the world. Currently, he teaches English as a second language and coaches “American Basketball” in schools in China for young people hoping for American private school scholarships. Does he still play his violin? YES! Darrell performed with Kay Pech, Jonathan Sun and Melissa Hasin in Schickele’s “American Dreams” Quartet No. 1 at an ASTA Chamber Music Festival in 2014.

Jonathan, a violinist, is currently working in northern California, has played in CMIsc concerts in fourteen summers and recently performed with Kay Pech, Darrell Peries and Melissa Hasin in Schickele’s “American Dreams” Quartet No. 1 at an ASTA Chamber Music Festival in 2014. He drove/flew here for four weekends of rehearsals to prepare the Debussy String Quartet for July 2015. He performed the George Enescu Aubade lontaine in July 2016 with Kay Pech and Judy Kang. Jonathan graduated from Sunny Hills HS (’06) and earned a B.S. in Psychology with a Concentration in Neuroscience and Behavior from UC San Diego.

A violinist with a PhD (’13) and MD (’15) at University of Chicago in cancer biology, Masters degree at UC-Berkeley ’09, homeschooled ’02, Marina began lessons with Kay Pech at the age of six. The only student in California to ever win the YAG (soloist) and VOCE top honors (Mendelssohn and Shostakovich piano trios) in the same year (2000), she has continued to enjoy performing. She married her partner, Hannah Eldridge, in Chicago on August 13, 2011. Both violinists, they share lots of chamber music together. She lives in Madison, where she is a member of the Medical Faculty for the University of Wisconsin.

An important member of the CMIsc faculty, Judy’s cello career has blossomed since her graduation from La Mirada HS (’07) and USC Thornton School of Music (’11). She is a gifted cellist and pianist. In summer 2014 she began performing with Celine Dion in Las Vegas, has been very busy with Los Angeles music makers, and you can read much more on her Faculty page as well as photos/videos on Facebook.

Alida began her violin studies with Kay Pech in New Jersey at the age of 5 in the 1970’s, then continued her studies in music in Europe. She had her own string quartet, The Amsterdam String Quartet, and you may read about her here. She is frequently asked to guest-lead numerous orchestras such as The English Concert, Anima Eterna, the Kings Consort and The English Baroque Soloists. She was concertmaster (2001-2004) of The Amsterdam Baroque Orchestra (Ton Koopman), recording multiple CD’s.